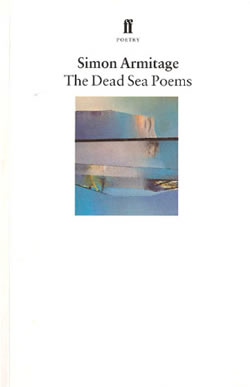 A collection of poems in which questions of belief and trust, of identity and knowledge, mingle with more mundane considerations, such as the problems of owning a dog, and the vicissitudes of the job market.

And I was travelling lightly, barefoot
over bedrock, then through lands that were stitched
with breadplant and camomile. Or was it

burdock. For a living I was driving
a river of goats towards clean water,
when one of the herd cut loose to a cave

on the skyline. To flush it out, I shaped
a sling from a length of cotton bandage,
or was it a blanket, then launched a rock

at the target, which let out a racket -
the tell-tale sound of man-made objects.
Inside the cave like a set of skittles

stood a dozen caskets, and each one gasped -
a little theatrically perhaps -
when opened, then gave out a breath of musk

and pollen, and reaching down through cool sand
I found poems written in my own hand.
Being greatly in need of food and clothing,

and out of pockets, I let the lot go
for twelve times nothing, but saw them again
this spring, on public display, out of reach

under infra-red and ultra-sonic,
apparently worth an absolute packet.
Knowing now the price of my early art

I have gone some way towards taking it all
to heart, by bearing it all in mind, like
praying, saying it over and over

at night, by singing the whole of the work
to myself, every page of that innocent,
everyday, effortless verse, of which this
is the first.