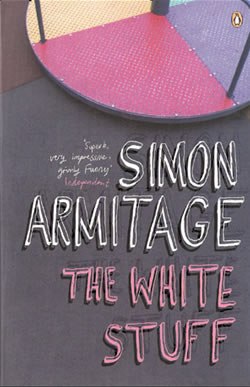 Abbie Fenton wants a baby. Her husband Felix, not unaware of the thunderous ticking of Abbie's biological clock, wants to oblige but their home has still to be blessed. Cue the usual round of doctors, tests, probes and scans – all to no avail.

So Abbie – adopted at birth – decides that if she can't have a child then she must at least discover whose child she is. Soon, she and Felix are caught up in a make-or-break search for family, identity and meaning. And little do they know quite where the journey will take them …

The flat roof of Sconford and Tilden County Primary and Infant School was littered with pop bottles, Ribena cartons, sweet packets, half-bricks and several shoes. The roof itself was in need of repair. In three separate places the bitumen had bubbled and cracked, and from the water-tank to the air-vent a large fissure had opened up that reminded Felix of one of those mid-ocean trenches in a geography textbook. Not that any of this would have been apparent to the parents, teachers and former pupils beneath it in the glass-fronted reception area, lifting glasses of sherry to their mouths and circling around a huge platter of crisps and snacks. From his position on top of the slide, Felix had an unobstructed view of the whole school. Squeezing the record button with his thumb, he panned slowly from left to right, taking in the crowd of adults lining all four sides of the playground and the decorated podium with its row of empty chairs, then swung the camera high towards the school flag flapping in the breeze. From the flagpole, he followed a strip of lightning-conductor down the brick wall, then along a line of blue and white bunting tied to a handle inside the louver window over the main entrance. Through the glass, the culminating moment of this long sequence should have been a face. Abbie's face, under her new lilac hat, smiling and chatting with some long-lost friend or raising her amber coloured drink to the air, toasting the sunlight. But the image was fuzzy and blurred, and when it finally resolved, the subject of the auto-focus turned out to be a shockingly large pumpkin lanced with dozens of cocktail sticks loaded with either a cube of cheese or a silver-skin onion.

Opening up the shot to take in the rest of the table, Felix was struck by the colour of the food, how it all seemed to come from the same part of the spectrum. Brown bread sandwiches, yellow crisps, Twiglets, corn-footballs and other rusty looking nibbles, a choice of cheeses, cocktail sausages, quarters of scotch egg (luminous yellow yolks encrusted with brown sausage meat and orange breadcrumbs), peanuts, pastries and an assortment of other more exotic foodstuffs such as bhajees and goujons, all battered and tanned. Paul Corley, a boy in the church choir, had been allergic to all things orange. He could never eat anything at birthday parties, and nearly died when Martin Piggot made him swallow a piece of tangerine peel after Evensong. Felix was still remembering the breathless and gurgling Paul Corley, flat on his back in the vestry with his lips swelling and his eyes bulging in their sockets, when the doors of the school flew open. By the time he'd pulled back with the zoom and readjusted his line of vision, the first half-a-dozen mini-astronauts in spray-painted silver wellies and crash helmets covered in tin foil had already entered the playground and were walking with slow, exaggerated strides around their cardboard rocket. Space, it emerged, was the theme for the whole display. No sooner had the first-years departed to the sound of "I Lost My Heart To A Starship Trooper" than out came a similar number of second years to the tune of David Bowie's "A Space Odyssey". And so it went on, until every year-group in the school had enacted a scene from some distant corner of the universe to a soundtrack which included, "Rocket Man", "Calling Occupants of Interplanetary Craft", Queen's "Flash", the theme from Star Trek, and Duran Duran's "This is Planet Earth". Felix filmed the performances but only a snippet from each. He knew from experience the tedium of the over-long home-video, and in any case, he was saving the battery for the main event.

It was getting towards midday, with the sun at its highest and brightest, when the last space-cadets filed back into the school through the side door, and Mr Fellows, in a tie and short-sleeved shirt walked towards the hop-scotch pattern painted in yellow on the grey concrete. Feedback howled between microphone and speakers, causing some of the children to stick their fingers in their ears and three pigeons to lift from the rungs of the monkey-bars and head for a telegraph pole across the road. After the technical adjustments had been made, Mr Fellows cleared his throat and gave his opening address. Still at the top of the slide, but standing now with one leg hooked around the handrail, Felix had a privileged view of the whole proceedings, and even though the wind dragged at his amplified voice, the words of Sconford and Tilden's head-teacher were audible and clear.

"Thank you so much for attending our celebrations here today, and as well as thanking all the children of the school for a display that really was out of this world, could we also show our appreciation to our music and drama teacher Miss Swann, who has worked tirelessly on this project for several months."

There was generous applause, then cheering, and even a couple of wolf-whistles as a young woman in a pair of tight red trousers and a blouse that didn't quite reach her navel gave a theatrical curtsy and disappeared back into the crowd.

"And so on to what I can safely say is my favourite moment in the whole school year. The crowning of the May Queen has been an annual event at this school for over thirty years. In just a moment, our current Queen, Eliza Hardison, will be taking her throne. But this year is special. The powers that be insist that at sixty-five, this will be my last year as headmaster of Sconford and Tilden, even if in my own mind I'm still the eager, energetic, and er . . . handsome young man that I was all those years ago."

There was more applause, and another wolf-whistle, this time from Miss Swann herself.

"To mark this occasion, we've looked high and low, far and wide, and are delighted to bring you a parade of all those darling buds that have blossomed and bloomed into true beauties since the year they were first crowned. So without further ado, from 1972, please welcome our very first May Queen, Christine Woodhouse, formerly Christine Tummings."

Felix had already trained the camera on the main entrance in anticipation. Mrs Woodhouse, nee Tummings, tall and elegant with her black hair screwed above her head and skewered with two small sticks, walked confidently across the yard and shook hands with Mr Fellows. Her two-piece pastel-green suit gave her the look of an air-hostess with one of the better airlines. And there was something about the way she took her seat in the first empty chair â€” facing forwards, legs crossed, one hand on each thigh â€” that confirmed the impression.

"Cabin crew, please take your seats for landing. Doors to manual," whispered Felix, then bit his tongue, remembering the microphone.

This time, a smaller, rounder woman in a denim jacket and a white T-shirt printed with a big black question mark jogged into view. The bum of her jeans had been patched with a Carlsberg beer- towel, which Felix homed in on. And given the slur of words that poured from her mouth as she grabbed the microphone from a surprised Mr Fellows, his camerawork wasn't entirely inappropriate.

"Go for it, Jeannie," shouted a boozy voice in the crowd, but when Jeannie did go for it with a throaty and drunken, "Oggie, Oggie, Oggie," there was little or no response. As she hopped up onto the platform with a little hitch-kick in mid air then dropped into her chair, Felix would liked to have captured the expression of the immaculate Mrs Woodhouse sitting next to her. But to be pointing the camcorder at the wrong woman, at that precise moment, would have been more than his life was worth.

"And from 1974, now Abbie Fenton, but to us, Abbie Lawrence," boomed Mr Fellows, beckoning the next guest with his open hand. And as his wife pushed open the glass door, Felix was already rolling, his elbows and spine locked in a tripod, tracking Abbie as she walked smartly to the centre of the playground, removed her new, lilac hat, allowed her old head-teacher to peck her once on the left cheek, then climbed the two wooden stairs to the stage to take her seat. Got it. Only later, when Abbie was in the can, did Felix dare try a few tricks with his new toy. He scrolled through the function menu. Julie Hardacre, of 1979 vintage, was recorded using the time-lapse feature, and Paula Dewdeney, from 1985 in monochrome. The perfectly bald Kay Simmister, 1985, and 1986â€™s Maureen Simmister, in a rather obvious wig, looked very weird in either half of the split-screen. Fading up from black he tried out the macro-zoom on Karine Moon, 1987, and the soft-focus on 1989â€™s Joyelle Bright, who was heavily pregnant and by Felix's calculation not a day older than fifteen. By the time ten-year old Eliza Hardison had been lifted into her throne, arrayed with the purple robe, the gold sash and the glittering tiara, there wasn't a feature he hadn't tried and barely a minute's worth of power left in the battery. When the hem of Eliza's dress became trapped under the heel of her shoe, she was attended to by her mother, a woman of about Abbie's age, who ran to the stage and unhooked the dress before dabbing down a few stray locks of her daughter's hair with a wet finger. For his final shot, Felix tracked across the podium in sepia tone, capturing twenty-odd faces in various states of innocence, happiness, health, wisdom, maturity, failure and decay. Then the camera went dead. He waved at Abbie. She waved back and pointed him out to Mr Fellows, who was now surrounded by women and girls, and carried beautiful young Eliza, crowned and adored, in his arms. Felix made his way down the hot, metal slide, tentatively at first, holding on to the side. Then half-way to the bottom he let go, and instantly saw the big Norfolk sky go flying backwards over his head, followed closely by the spotless, man-made uppers of his new trainers at the end of his upside-down legs. Followed by not much less that a thousand pound's worth of digital camera, floating in mid-air.