Tyrannosaurus Rex versus The Corduroy Kid 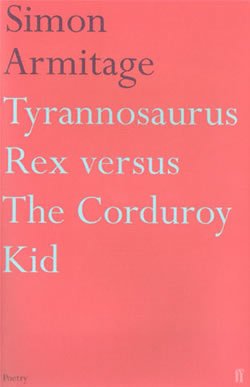 Tyrannosaurus Rex versus The Corduroy Kid engages with the matter of ‘Merrie England’. The poet’s preoccupation with utopias and new republics, with visions and intimations, is in the service of a sharpened focus upon this island – ‘here at the Empire’s end’ – just as his evolutionary concerns lock into a heightened sense of where we now stand, in the company of animals (birds, sloths, horses), or where we part company and give lamentable rein to the beast within. The poems are scored by oppositions and fault-lines: between youth and age, ancients and moderns, monsters and underdogs, and – ultimately and inevitably – nations.

Simon Armitage reads and discusses his poem A Vision for BBC Teach.

The future was a beautiful place, once.
Remember the full-blown balsa-wood town
on public display in the Civic Hall.
The ring-bound sketches, artists' impressions,
blueprints of smoked glass and tubular steel,
board-game suburbs, modes of transportation
like fairground rides or executive toys.
Cities like dreams, cantilevered by light.
And people like us at the bottle-bank
next to the cycle-path, or dog-walking
over tended strips of fuzzy-felt grass,
or motoring home in electric cars,
model drivers. Or after the late show -
strolling the boulevard. They were the plans,
all underwritten in the neat left-hand
of architects - a true, legible script.
I pulled that future out of the north wind
at the landfill site, stamped with today's date,
riding the air with other such futures,
all unlived in and now fully extinct.