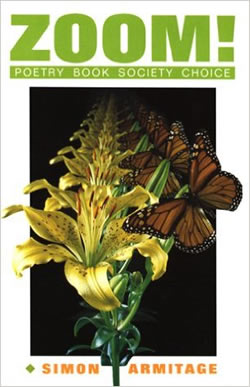 Zoom! was Armitage's first full collection, written while still working as a probation officer in Ashton-under-Lyne.

'You couldn't mistake Simon Armitage for any other poet. He has found his voice early, and it really is hisown voice – his language and rhythms draw from the Pennine village where he lives: robust, no-nonsense and (above all) honest'

'His concerns are primarily social, whether about a cricket match, a love affair or his tour-de-force life of a ten pence piece. What is special is the combination of integrity, a seemingly effortless (and inexhaustible) invention, and a quite remarkable technical accomplishment. In this he reminds me of early Auden, a comparison that doesn't strike me as extravagant.'

'A few poems into the book you think "He can't keep this pace up", but you're wrong. As you turn the page you find something even more rich in detail and arresting imagery, poems that are finished pieces in themselves but which comment on and amplify each other'.

Out of the melting pot, into the mint;
next news I was loose change for a Leeds pimp,
burning a hole in his skin-tight pocket
till he tipped a busker by the precinct.

Not the most ceremonious release
for a fresh faced coin cutting its teeth.
But that's my point: if you're poorly bartered
you're scuppered before you've even started.

My lowest ebb was a seven month spell
spent head down in a wishing well,
half eclipsed by an oxidized tuppence
which impressed me with its green circumference.

When they fished me out I made a few phone calls,
fed a few meters, hung round the pool halls.
I slotted in well, but all that vending
blunted my edges and did my head in.

Once I came within an ace of the end
on the stern of a North Sea Ferry, when
some half-cut, ham-fisted cockney tossed me
up into the air and almost dropped me

and every transaction flashed before me
like a time lapse autobiography.
Now, just the thought of travel by water
lifts the serrations around my border.

Some day I know I'll be bagged up and sent
to that knacker's yard for the over-spent
to be broken, boiled, unmade and replaced,
for my metals to go their separate ways...

which is sad. All coins have dreams. Some castings
from my own batch, I recall, were hatching
an exchange scam on the foreign market
and some inside jobs on one arm bandits.

My own ambition? Well, that was simple:
to be flipped in Wembley's centre circle,
to twist, to turn, to hang like a planet,
to touch down on that emerald carpet.

Those with faith in the system say 'don't quit,
bide your time, if you're worth it, you'll make it.'
But I was robbed, I was badly tendered.
I could have scored. I could have contended.

Table of Contents
Snow Joke
On Miles Platting Station
All We Can Do
Why Write of the Sun
Greenhouse
Nightshift
Newton's Third Law
All Beer and Skittles
Don't Sing
It Ain't What You Do It's What It Does to
The Bears in Yosemite Park
Bus Talk
Man on the Line
Phenomenology
Don't Blink
Dormobile
And You Know What Thought Did
Getting at Stars
This Time Last Year
Very Simply Topping Up the Brake Fluid
Missed It by That Much
The Peruvian Anchovy Industry
Poem
Bylot Island
Gone
Girl
Screenplay
Simon Says
Lamping
Poem by the Boy Outside the Fire Station
Dykes
A Painted Bird for Thomas Szasz
Heron
Angoisse
November
Still for Sale
Home on the Range
Advertisement
Eyewitness
Resonant Frequencies
An Ornithology of the Americas
Canard
Somewhere Along the Line
Potassium
Social Inquiry Report
Bempton
Eighties, Nineties
You Are Here
The Civilians
Ten Pence Story
Hunky Dory
The Visitor
The Stuff
B&B
Team Lada
Finding Your Own Feet
Ivory
Not the Bermuda Triangle
Remembering the East Coast
Working for the Mussel Farmers
Zoom!