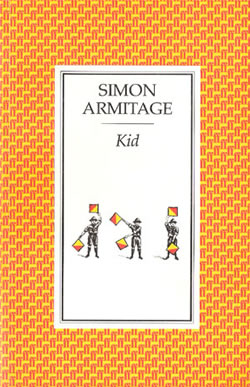 A Poetry Book Society Choice; shortlisted for the Whitbread Prize.

Kid was Armitage's second book of poems, his first with Faber and Faber. It includes the themes of domestic tension, law and order, submerged and exploding violence, and the anarchic strain in the human psyche.

Not The Furniture Game

His hair was a crow fished out of a blocked chimney
and his eyes were boiled eggs with the tops hammered in
and his blink was a cat flap
and his teeth were bluestones or the Easter Island statues
and his bite was a perfect horseshoe.
His nostrils were both barrels of a shotgun, loaded.
And his mouth was an oil exploration project gone bankrupt
and his smile was a caesarean section
and his tongue was an iguanodon
and his whistle was a laser beam
and his laugh was a bad case of kennel cough.
He coughed, and it was malt whisky.
And his headaches were Arson in Her Majesty's Dockyards
and his arguments were outboard motors strangled with fishing line
and his neck was a bandstand
and his Adam's apple was a ball cock
and his arms were milk running off from a broken bottle.
His elbows were boomerangs or pinking shears.
And his wrists were ankles
and his handshakes were puff adders in the bran tub
and his fingers were astronauts found dead in their spacesuits
and the palms of his hands were action paintings
and both thumbs were blue touchpaper.
And his shadow was an opencast mine.
And his dog was a sentry box with no-one in it
and his heart was a first world war grenade discovered by children
and his nipples were timers for incendary devices
and his shoulder blades were two butchers at the meat cleaving competition
and his belly button was the Falkland Islands
and his private parts were the Bermuda triangle
and his backside was a priest hole
and his stretchmarks were the tide going out.
The whole system of his blood was Dutch elm disease.
And his legs were depth charges
and his knees were fossils waiting to be tapped open
and his ligaments were rifles wrapped in oilcloth under the floorboards
and his calves were the undercarriages of Shackletons.
The balls of his feet were where meteorites had landed
and his toes were a nest of mice under the lawn mower.
And his footprints were Vietnam
and his promises were hot air balloons floating off over the trees
and his one-liners were footballs through other peoples' windows
and his grin was the Great Wall of China as seen from the moon
and the last time they talked, it was apartheid.

She was a chair, tipped over backwards
with his donkey jacket on her shoulders.

They told him,
and his face was a hole
where the ice had not been thick enough to hold her.