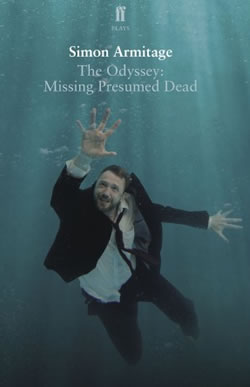 Simon Armitage's stage play The Odyssey: Missing Presumed Dead premiered at the Liverpool Everyman in 2015, directed by Nick Bagnall. Its tour of the UK as a co-production with English Touring Theatre included Shakespeare's Globe on London's Southbank.

A high-ranking government minister with a colourful past is sent on a diplomatic mission to Istanbul. When his trip ends up in a bar-room brawl, he becomes Europe's most wanted man overnight. Chased by the authorities, damned by religious leaders, pursued by those looking for vengeance and head-hunted by fanatics, his odyssey begins.

Plunged into the ancient past, Odysseus must now contend with all the unworldly beings and unnatural phenomena that stand in his way. The Cyclops, the Sirens, witches, whirlpools and flesh-eating armies must all be overcome in the struggle for survival and the long voyage back home.